When working with the ASTM D86 test method, the atmospheric distillation rate should be maintained within 4-5 mL per minute throughout the whole analysis, but maintaining this rate presents a number of challenges.

Heavier components require higher temperatures to evaporate, so as the distillation progresses, the heating rate must be adjusted. If samples are heated too fast, they risk overshooting 5 mL/minute. Conversely, samples that are not heated fast enough are likely to underperform.

Adding ethanol to gasoline (a common oxygenate) creates what is often referred to as an azeotropic blend. This approach has the potential to increase the octane number as well as improving combustion performance.  Azeotrope blends tend to be difficult to distill because the slope of the boiling curve flattens at a particular point in the process. In some instances, the physical boiling is halted, even if heat is applied.

When boiling finishes and the distillation rate drops to below the 4 mL/minute mark, operators and automated instruments will generally increase heating power. Unfortunately, however, this can have the opposite effect, as the azeotropic point will eventually break, and the surplus heat prompts vapors to rapidly form in the flask, spreading to the condenser tube and increasing the distillation rate to above the 5 mL/minute mark.

The maintenance of distillation rates within method-specified limits is such a vital factor in ensuring repeatability and reproducibility (r & R) that Section 10.12 of ASTM D86 clearly states: “Repeat any distillation that did not meet the requirements described in 10.9, 10.10, and 10.11.” Sections 10.9 to 10.11 define acceptable times to reach FBP, IBP, and distillation rates, stating that these should be kept as constant as practically possible during testing.

Blending operations, refineries, R&D labs, and third-party testing laboratories need an instrument that is capable of maintaining exceptionally strict control of the distillation rate, even when working with challenging samples.

OptiDist’s versatile design is compatible with multiple methods and non-standard capability, allowing it to be easily adapted for a wide range of applications. The OptiDist facilitates straightforward, one-button operation. The user-friendly distillation analyzer includes a sophisticated man-machine interface (MMI) that helps enable error-free operation with minimal operator expertise, thanks to its built-in optimizer.

With OptiDist there is no need for manual heater settings or preliminary trials; the operator simply chooses the test method and launches the distillation process by pressing the “Start” button.

OptiDist constantly monitors liquid temperature using a non-intrusive IR sensor located on the side of the flask. This information is fed to a proprietary algorithm in order to ascertain the most optimal heating power. The result of this approach is a distillation that maintains a controlled distillation rate, comfortably within the 4 and 5 mL/minute limits.

This ongoing monitoring allows OptiDist to efficiently and automatically regulate the initial heat, without needing any additional input from the operator. Initial heat is managed by a proprietary algorithm, informed by input from the optimizer’s readings.

The final heat adjustment is also managed by the optimizer, meaning that no guesswork is involved in this often complicated step. OptiDist frees up operator time while continually providing repeatable results from the first run, eliminating the need to determine optimized parameters through the running of duplicate samples. 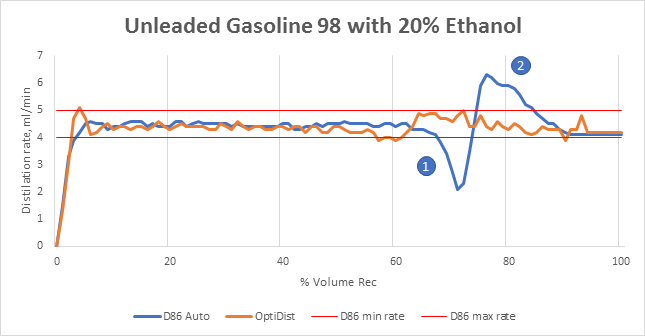 Figure 1. A comparison of distillation rates for gasoline containing 20% ethanol run in a traditional D86 analyzer and the OptiDist with optimizer technology.

Figure 1 displays distillation rates for gasoline containing 20% ethanol. This experiment saw the gasoline-run in a traditional D86 automated analyzer (blue) and with OptiDist via its unique optimizer (orange). The azeotropic point for a 20% blend is found around 70% volume. Figure 1 show a steep decline in distillation rate (1) when distilled using a traditional D86 automatic analyzer (blue).

This occurs because the distillation reaches the azeotropic point, which is where boiling stops. Conventional D86 automated analyzers will address declining distillation rates by increasing heating power.

While this extra heating increases the sample temperature, it is not reflected until the azeotrope breaks. This can be viewed in Figure 1 as a sharp increase in the distillation rate. At this point (2) the distillation rate shifts from its lowest point (approximately 2.1 mL/minute) up to its highest point (approximately 6.3 mL/minute) in under 5% of the recovered volume.

Figure 1 also displays the OptiDist distillation run with the optimizer (orange). OptiDist (thanks to its optimizer) is able to assume control of the heating rate, predictively controlling this while determining when the sample temperature will surge or decline. It is able to achieve this long before the distillation rate spikes or dips, therefore resulting in much more stable control and improved site repeatability and reproducibility.

Lab distillation is utilized in many applications, including fuel certification and process monitoring ahead of product release. Product quality is kept close to strictly defined limits, reducing potentially expensive giveaway. This also means a more rapid response time, because repeating tests is no longer required. These time savings very much add up when each distillation test can take between 40 and 60 minutes, including time taken for appropriate preparation and cleaning.

Tests that have been run with OptiDist and its optimizer function result in superior distillations, even when working with challenging samples such as ethanol-containing gasoline, contaminated products, and unknown samples.

This information has been sourced, reviewed and adapted from materials provided by PAC

For more information on this source, please visit www.pac.com.